Today DatPizz brings you a wonderful new tape from one of our favorite artists, Tamani Joy. If you haven’t heard of him, check out our discography to catch up on his work. It’s definitely worth your time, as Tamani seems to be bringing something that I honestly haven’t heard anyone else in the scene even getting close to. In his new tape “JOYRAT,” Tamani is achieving the sound that Wayne originally envisioned when he released the… experiment that was Rebirth. Even artists like Young Thug that seem to be attempting to head down that lane seem scared to leave behind their 808 drums and trap high-hats. The same is not to be said for Tamani, as he spends these six tracks crooning over some luscious guitar production and very minimal percussion. His sound his so unique that I honestly have no clue exactly what to call it. Regardless, Tamani puts forth a project that is the perfect kind to throw on while you smoke some doinks and chill with your homies, as the guitars harmonize with his voice to create a serene soundscape. Give it a listen and let us know what you think. 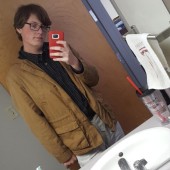