KirbLaGoop Finds Yet Another Way to Reinvent His Sound

When most people think of KirbLaGoop, they think one of two things. First, who is KirbLaGoop and what is that name, right? Hailing from Sarasota, Florida, where there are a lot of old people and not many exciting things to do, KirbLaGoop has consistently proven to be one of the strongest MC’s in the underground. Using a flow that draws similarities to the fast, schizophrenic cadence of $uicideboy$ or Ghostmane, whilst using a nasally voice reminiscent of early-90’s rap groups such as House of Pain or Cypress Hill, but with a Florida accent similar to Kodak Black and Glokknine, Kirb has been refining his sound for years and it shines on this album. On initial listens, his voice may confuse you, but once it clicks, his mesmerizing and trance inducing flow enraptures the audience, so much so that threads can be found online claiming he is one of the most unique rappers currently making noise online. He has also been known to collaborate with many influential underground mainstays, with feature credits including Lil Peep, Lil Tracy and many other GBC or GBC-affiliate musicians as well as bigger artists such as Pi’erre Bourne and Soulja Boy.

“Sum Slight”, KirbLaGoop’s first album of 2019 (I say first since Kirb is known for having an extremely prolific output) finds the rapper lending his voice to beats similar to the current West Coast sound being dominated by the likes of Shoreline Mafia and others. Over the course of 2018, Kirb explored a variety of beat choices to expand his range, with atmospheric samples on his collab tape with Nedarb or more of an emo influence on his Fish Narc collab tape. However, I think Kirb can stop exploring, because this tape is some of his best work in recent memory. His nasally and chaotic flow fits so perfectly over the production on the first song, “Bring It Back”, reminding me of a better version of “Thotiana” by Blueface. The stylistic choice remains the central focus of the album, and Kirb is able to shine over this choice. The intensity and focus in his raps and wordplay is top notch; KirbLaGoop grabs the listener immediately and doesn’t let go until the eight track album ends. This album may not be for everyone, but if you enjoy a high-pitched and nasally voice over bass shattering production this album will be on repeat for you for a while. Hopefully KirbLaGoop continues to release material as good as this the rest of the year, but for now let’s just enjoy one of Kirb’s best albums that he has released. 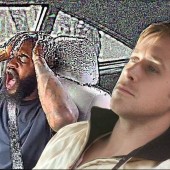