Deadstar by Smokepurpp: A Retrospective Review

Nowadays it’s hard to find an article on Florida based SoundCloud sensation Smokepurpp without his partner in crime Lil Pump getting a mention as well. With the mind-blowing success of the ear-worm single Gucci Gang I am remiss to say that Pump has outdone Purpp in terms of objective popularity and success. Both artists dropped their debut commercial projects within a week of each other and Pump both outsold and out-streamed Purpp. Gucci Gang became a chart topping hit, while Deadstar’s biggest song Audi peaked at number 77 on billboard. I am apt to call this a tragedy, because while Lil Pump is a good tape on it’s own, it’s nowhere near comparable to Deadstar.

Smokepurpp was a producer before he became an MC and this has always shown in his music. He produced a handful of his own tracks as well as a few of Lil Pump’s first songs. Purpp has a great sense of melody and can make hooks that are not only catchy, but downright impressive in their beauty. We get a healthy dose of melody with tracks like “Different Color Molly”, “Topic” and “To The Moon”. The hooks on these tracks are simply transcendent, both catchy and beautiful, all uniquely their own and stand out as the best songs on the project. That isn’t to say that Purpp can’t be ignorant either, because he most definitely can. Tracks like “Audi”, “Bless Yo Trap”, “Nose” and “Ok” all follow the traditional Purpp/Pump formula of “repeating a certain few words over and over and making it a hook”. This type of music from Purpp is all fine and good, but the first and second half of the album show a clear distinction in terms of skill and songwriting. Essentially, the whole first half of this album is ignorant, incredibly simple trap bangers, typical bubble gum SoundCloud rap. Then the listener is hit with Topic, which knocks them on their ass with a drugged out, beautiful hook. From this song until the end of the project, we are treated to some fantastic dreamy production and vocals that can only be described as “soothingly beautiful”. The last two tracks “RIP Max” and “Purgatory” feel like the come down after an insane rager of a party. Calm, carefree drum loops glide by seamlessly with Purpp’s emotive and confident; yet soothing vocal melodies. I cannot argue whether or not this was intentional, but the clear difference in tone and sound between the first and second half of Deadstar has me suspecting that Purpp has a lot more creativity and knowledge of album structure than he lets on.

The features on this project fit the tone and overall style like a glove. Travis Scott, a clear influence of Purpp’s, makes a slightly too polished appearance on the very unpolished song “Fingers Blue”. Living legend Juicy J brings his effortless charisma to “Streets Love Me”. We even get a feature from DRAM who absolutely knocks it out of the park on “Count Up”, completely outshining Purpp in the process. Again, the use of features speaks to the construction of the album itself. All rappers are kept to the first half, while the only feature on the second half is that of an R&B singer.

To sum up my thoughts in one easy, tweet-able sentence, this album was better than it needed to be. SoundCloud rap has gotten a reputation as shallow, DIY and above all, easy to make. Lil Pump is a great little project for what it is, but if I were asked to describe it, those adjectives wouldn’t be off base. If Purpp had released a project of nothing but music like the first half of this tape he would have cleared the goalposts with no issues. The fact that he went above and beyond what was expected and delivered a well done melodic second half speaks to his passion for the craft. There is great skill on show here that if polished and given a bit more substance, could really shape itself out to be something great and long lasting. I love “Gucci Gang” as much as the next guy, but I’d kill to hear “Different Color Molly” or “To The Moon” in the club. Hell, I’d even take “Audi”. 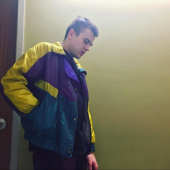